Deprecated: implode(): Passing glue string after array is deprecated. Swap the parameters in /home/customer/www/iciam2019.com/public_html/plugins/content/jw_allvideos/jw_allvideos.php on line 73

How to reach the PALAU DE LES ARTS

Victor M. Pérez-García is a professor of Applied Mathematics. He has published more than 130 research papers and has received almost 5000 citations. Currently he is the Director of the Institute of Applied Mathematics in Sciences and the Head of the Mathematical Oncology Laboratory at University of Castilla-La Mancha (MôLAB). He is using mathematics to solve problems in oncology, specifically finding optimal treatments, identifying novel biomarkers, raising hypothesis of applicability in cancer, personalizing therapies and developing in-silico clinical trials. He also works on other biomedical problems such as diabetes. He and his research group collaborate with more than 25 hospitals and biomedical research institutes worldwide.

Tickets can be bought through the on-line registration form at the Special price for Attendees (cost 6€); Limited places, tickets will be available soon!! à Limited places. Sold out.

Libretto by Cary Plotkin with Ted Weiss, based on the composer’s idea.
Archimedes describes the life of the hellenistic polymath (physicist, mathematician and engineer) from his childhood until the end of his life, based on the Greek historian Plutarch’s biography of the Roman general Marcellus. 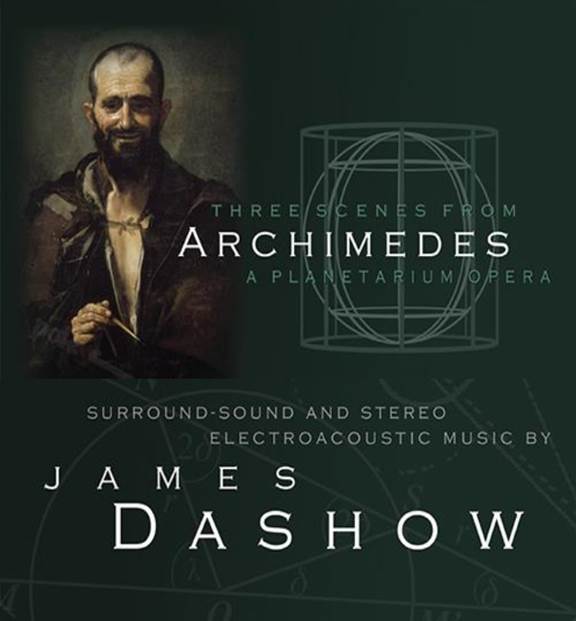 James Dashow (1944, Chicago, USA) is a composer of electroacoustic music, instrumental music and opera. One of the first composers for digital audio synthesis, he studied with Arthur Berger and Goffredo Petrassi (Fullbright scholarship), and was invited by G. Tisato to work at the computer center of the University of Padua, where he created the first computer-based compositions. He has lectured at MIT and Princeton University and continues to teach master classes and concerts in Europe and North America. He has been vice-president of the "International Computer Music Association". He is the author of the MUSIC30 language for digital sound synthesis and inventor of the Dyad system. For several years, he co-produced a weekly program of contemporary music for RAI in collaboration with Riccardo Bianchini. The most important awards and prizes he has received include the "Prix Magistere" de Bourges (2000), the Guggenheim Foundation (1989) the Koussevitzky Foundation (1998), and in 2011 the CEMAT Foundation awarded him the prize for his entire career in recognition for his exceptional contributions to electro-acoustic music.
JAMES DASHOW'S WEBSITE

The Planetarium Opera, will be celebrated at the Hemisfèric (how to get there). Hemisferic, was the first element to be built at the Ciutat de les Arts i les Ciències. The Hemisfèric, opened on April 10th 1998, is a unique and spectacular building designed by Santiago Calatrava and represents a large human eye, surrounded by water to enhance its beauty. It houses the planetarium and the largest IMAX Dome cinema in Spain.

ICIAM 2019  has partnered with the international film and broadcasting company, WebsEdge for the 3rd time to bring ICIAM TV to this year’s international congress. Click here to see the channel!

Enter in our multimedia section to see pictures and videos of the highlights moments!